Demeter’s Greenhouse caught my eye because, well, as of late I’ve had this strange urge to build a greenhouse, grow some tropical flowers and spend some quiet time among plants. Then one of my neighbor’s children will fling a baseball into our yard and probably smash the whole thing up. That is when I realize we need a fence before a greenhouse. So, in lieu of the real thing, I reach for Demeter’s Greenhouse.

In Bottle: As tangental as I was in that introductory paragraph, Greenhouse gets to the point a bit faster. Unfortunately that point seems to be, “I smell fake!”.

Applied: I’ve been in a few greenhouses growing up. One of my cousins has one in his backyard where he grows vegetables, fruits, flowers and other things that make me jealous because the best I’ve done is a couple of spindly trees and a sick looking fern. Some of my favorite smells is the scent of humidity, moist earth, green leaves with a faint aroma of flowers. That’s not what I get from Demeter’s Greenhouse. I get a synthetic green herbal shock with a dollar store level floral note in the background. It’s not unpleasant, but it’s not greenhouse either. There’s a bit of moistness to the fragrance, but it’s really quite off from the greenhouses I’ve been in. I suppose it’s hard to capture the essence of something that could have such widely varying characteristics, and really, I’m not taking away points because bottled Greenhouse doesn’t smell like my cousin’s greenhouse. I’m taking away points because something in this smells really synthetic. While not unpleasant, I can’t agree that this is a greenhouse.

Extra: It wasn’t until my recent move and discovery that not every living plant I touch immediately turns brown did I discover that I actually like gardening. Or at least, I would love to garden. Fence first. Garden after. Real greenhouse someday. In the mean time, Demeter’s Greenhouse isn’t going to cut it for me.

Design: Designed simply just like every other Demeter fragrance. Nice simple bottle, not high end or luxe in anyway. For the price point this is pretty much all I expected and if nothing else, the bottles are reusable.

I might be ragging on Greenhouse a little too much. Really, it’s okay. Pleasant if I were to push it a little. But to me, it’s by no means a greenhouse smell.

I don’t know what to say about Demeter’s more literal fragrances like Vanilla Ice Cream. The stuff smells like actual vanilla ice cream. Though I do get a bit of a synthetic vanilla vibe from this one. It is still a very good interpretation. 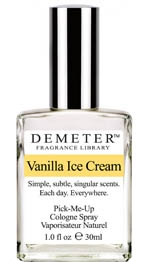 In Bottle: Rich, creamy, vanilla ice cream. It’s like the liquid essence and I like how it smells but there’s a certain plastic or synthetic quality to the vanilla that I can over look because everything else about the initial in-bottle sniff is so authentic.

Applied: Synthetic plastic vanilla that’s too sweet and too loud upon application. It is reminiscent of vanilla extract, the kind that you can buy at grocery stores that’s super sweet and has a bit of a licorice flavor (am I just crazy?) to it. I’m not wild about the vanilla note in this but most of the vanilla notes in your generic vanilla ice cream is of the loud, synthetic-like vanilla anyway. So it’s an authentic experience to be sure, but the authenticity is mimicking standard ice cream instead of gourmet stuff. The dry down comes really fast for a vanilla-based fragrance as the base turns a little darker while still maintaining its super sweet vanilla-like scent. The fragrance is pretty much one-dimensional and has pretty poor longevity (less than an hour of wear on my skin) but, like I said, it’s very authentic if you’re looking at generic ice creams.

Extra: There are a number of things I would have done differently with a vanilla ice cream inspired scent. I would use higher quality vanilla for one so that the fragrance takes on a spicy, dense quality instead of the syrupy sweet stuff that dominates this fragrance. I’d also give it a stronger base, and do something to make this stuff last longer. There were many ways this could have been done better but I suppose it’s ultimately achieving what Demeter set out to do; make a generic vanilla ice cream scent.

Design: The bottles are pretty basic, small and rectangular in shape. No thrills or frills. You get a pretty lackluster label with the bottle but then Demeter fragrances aren’t about the packaging. The bottle is fine. You may be interested to note that most of my Demeter bottles are the refillable type.

This is a good fragrance for you if you’re looking for an affordable straight-up vanilla scent and don’t care about synthetic vanilla vs. spicy vanilla. This stuff will deliver a sugary sweet rather authentic experience for a pretty cheap price. Just keep in mind that the longevity on this stuff seriously sucks.

My Melody was released in Demeter Fragrance Library’s Hello Kitty series alon with the Hello Kitty scent and the Little Twin Stars fragrance. My Melody is the foodiest one of the three.

In Bottle: Smooth vanilla and almond. Demeter tends to do simple fragrances anyway and My Melody is a pleasant enough blend of two very gourmand notes that creates an almost edible scent in the bottle.

Applied: Delicious vanilla almond and cake. My Melody smells like cupcakes and cute, happy, tasty things. Everyone needs a little pick-me-up, especially lately and this fragrance is a delightful reminder that–if nothing else–we still have cake. The fragrance doesn’t do any morphing or changing for a while and the scent is fairly fleeting. Being an eau de cologne and all. As the dry down sees a fade in the almond note making the vanilla note more prominent.

Extra: My Melody reminds me an awful lot of many Black Phoenix Alchemy Lab fragrances. The foodies, in particular. I want to say this reminds me a little bit of Dana O’Shee and Boo from BPAL.

Design: The bottle I came across was a small, very typical glass rectangle bottle that Demeter’s fragrances often come in. It’s got a very simple, plain level of packaging that seems a little clinical to me so there’s very little to the design for these fragrances.

My Melody should be a big hit for its target audience but it’s not really for me. I got Black Phoenix for gourmands like this that I really don’t see a need for something like this in my collection.

I spent a lot of time trying to find just the perfect tea fragrance. Something that smells exactly like a cup of earl grey tea without any other fluff surrounding it. I tried Black Phoenix Alchemy Labs with notes that were supposed to smell like earl grey tea but found there were other notes getting int he way. I tried niche and mainstream and finally I decided to settle down and see if Demeter Fragrance Library could get me any closer to that earl grey scent.

In Bottle: Bergamot with a squeeze of lemon, I think. There is a heavy, gritty, dusty note settled on a black tea like note underneath the citrus opener. It’s almost like smelling a cup of weak tea with a sprinkling of dust on top.

Applied: Bergamot comes roaring out on the entryway, dragging this very bright yellow lemon behind it. The dynamic citrus duo is followed by a really strong hit of black tea. This is the earl grey scent I’ve been looking for. No punches pulled, no extra fluff, just plain old earl grey with a squeeze of lemon. It smells as advertised and I’m just delighted! Then, just as quickly as I was delighted, Earl Grey Tea disappears on me. It packs its bags and heads out the door, leaving almost nothing but its slightly astringent black tea scent. And after a few more minutes, even that’s gone. I understand this cologne is truly meant as a very temporary burst of happiness and amazement but the longest I’ve ever gotten Earl Grey Tea to stay on my skin was around thirty minutes. I’ve tried lotion, I’ve tried using more, I’ve sprayed it on my clothes but this stuff just wasn’t meant to last. It’s fabulous while it’s there though, as close to earl grey tea as any perfume has gotten so far.

Extra: Demeter Fragrance Library, instead of focusing on complex evolutions of top, middle and base notes,  focuses more on creating scents to invoke memories. They have a huge selection of literal interpretation fragrances. If you think you might like Earl Grey Tea, why not try out their Orange Cream Pop fragrance? Dirt is a very popular one, and their Espresso scent might send you to the nearest Starbucks after sniffing.

Design: Really simple bottle. Glass cylinder with a metal cap. The sprayer distributes a larger than normal amount of fragrance but trust me, it’s necessary here. The labels and packaging are fairly simple but there’s not much complaint on my end here. Demeter doesn’t charge anywhere near as much as other fragrance houses might so I’m more than happy with the packaging we do get.

Gourmand, not gourmand? It smells good enough to drink to me. In either case, one could spend a lot of time smelling the offerings from Demeter but don’t forget that one of the founding noses of Demeter has branched off to form his own line too. Christopher Brosius creates fragrances under CB I Hate Perfume.