So what do you do when you get a hankering for a fruity perfume? Book it over to Hearts and Daggers and experience the fragrance the least smells like hearts and daggers! This perfume is well-loved amongst the mass market and I can see why, it’s fun, it’s fruity. It’s so painfully easy though. 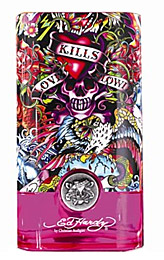 In Bottle: Fruit punch. Yeah. Even in the bottle Hearts and Daggers smells extremely sweet, like you’re taking a whiff of someone’s fruit punch containing as many fruits as they can cram in.

Applied: There’s an initial flare of sweet grape and what I swear smells like canned pineapple and mandarins. Then as the fragrance continues to age it throws more fruits into the mix. Berries, apples, mangos, what have you got? We’ll add it in. What’s that? A passionfruit? Why not? Basically Hearts and Daggers crams a bunch of fruit notes into itself so that the progression is so hard to define simply because all the fruit notes end up floating up to the top of the notes pyramid. As a result, this scent suffers hugely from longevity issues. Almost every note it uses is a delicate top note so they’ll fly away rather quickly. When Hearts and Daggers settles down into its dry down phase, you realize there’s something else mixed in with the fruits that you hadn’t realized was there until now. Some sort of sweet floral that I can’t quite put my finger on. I’m going out on a limb here and saying it’s probably the sugar-dipped jasmine missing all its indolic bite to usher out this scent.

Extra: Ed Hardy Hearts and Daggers is actually by Christian Audigier which refers to Ed Hardy as the line of perfumes. Well, if there had to be a defining perfume for teenage girls these days, Hearts and Daggers is probably it. It’s fun, it’s easy to wear, it’s way too sweet for me but probably perfect for anyone who enjoys these sweet scents. Just keep in mind that you will smell like fruit punch.

Design: Not a fan of the bottle design. Hearts and Daggers is a hot pink glass bottle with those signature Ed Hardy designed tatoo-esque elements. The bottle has a cap that you put over about 80% of the bottle–sort of like an all body hat for the bottle.

As stated above, despite this fragrance being an Eau de Parfum its longevity is severely lacking due to how most of the notes it’s composed of being delicate fruity top notes.

Reviewed in This Post: Hearts and Daggers, 2010, Eau de Parfum.

1 Million is a love it or hate it fragrance. In my case, I hate it. Just as a forewarning. It’s been lauded for its sillage, longevity and sweet, woodsy personality. All I smell is citrus and wood.

In Bottle: A nice, pleasant and slightly sweet citrus mixed with a reassuringly sheer spiciness.

Applied: Maybe I was a little heavy-handed with this stuff but it’s hard to see how one spray could go so wrong. I spritzed a little on my hand, enjoyed the sweet spiciness of it then walked away from the counter thinking it was an interesting twist for juice that came out of a gold bar. Then the woodsiness started to amp up, and keep amping up. Amping so much up that it overtakes everything and turns the scent’s mid-stage into a sharp, synthetic, spicy wood affair with a lingering amber cloying quality. This juice reminds me of Versace Versense slapped with a hint of spice. I tried to wait this one out for its fade but it took hours upon hours and eventually I had to take a shower. At which point, 1 Million was still detectable. This stuff is strong, it’s got huge projection, fantastic longevity, and it is a head turner–though it’s a nose turner for me. The dry down is a difficult thing to pin down due to what the scent had already gone through by the time it reached that point. I got more woods blended with a sweet amber as far as I could tell.

Extra: 1 Million won three fragrance awards in 2009 and judging by how this acted on me, I think I have some broken skin or something because I just can’t get on board for this. It was a mess to me. An men’s fragrance that overindulged in the wood notes department and slapped in some spicy sweetness to try and figure itself out.

Design: This design is garish and tacky and it doesn’t care! 1 Million is a glass bottle, with a gold plate that’s made to look like a brick of gold that you’d find sitting in cartoon versions of Fort Knox. It’s a rather heavy and hefty bottle, feels a little too heavy but then I can only assume its weight gives the allusion that wearing it would make you feel like a million bucks.

Maybe I’m being too harsh on 1 Million. Maybe I’ll give it another chance sometimes but I don’t see the appeal of it right now. Heck, maybe I even  sprayed too much.