Belle d’Opium seems to have a dedicated following as well as a number of detractors who think it’s a blight. Me, I kinda like it. 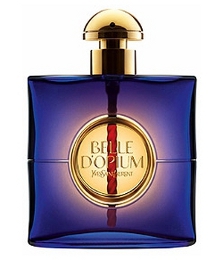 In Bottle: The original Opium took me a while to like but Belle d’Opium is a simpler animal that’s, consequently easier to get into. It’s a spicy floral with a woodsy heart.

Applied: Goes on strong with a blast of peppery florals. I get gardenia under the huge layer of pepper and a few minutes later I get some jasmine. The lily is a backstage thing, as it’s such a light note that the pepper, gardenia, jasmine and whatever else is in Belle d’Opium is drowning it out. This fragrance goes on strong but it’s not room-clearing, smell-you-across-the-football-field strong. It’s got a good amount of power but also has a sense of restraint. As you let Belle d’Opium progress it takes on a woodsy quality of perfumed sandalwood and spiciness. There is a bit of spiciness in the end stages as the lingering pepper imparts some more itself throughout the fragrance’s lifespan but there’s something to be said about a well done perfume that doesn’t resort to fruity floral territory. While this is no Opium, it’s still a pretty daring flanker.

Extra: Belle d’Opium is a fairly new fragrance, having been released in 2010. It was composed by Honorine Blanc who did fragrances such as Twilight Woods for Bath and Body Works, and funny enough, Someday for Justin Bieber. She was aided in this endeavor by Alberto Morillas who composed such greats like Acqua di Gio and Mugler Cologne.

Design: Belle d’Opium borrows a similar aesthetic to the new Opium bottle design. Only this time, it’s got some blue and purple in it. I’m still a bit sore from losing the classic Opium bottle but this redesign looks very nice and is rather suitable for the type of fragrance Opium projects itself as.

The comparisons between this and original Opium are inevitable. To me, aside from being from relatively the same fragrance family, Belle d’Opium is a distant echo of the original fragrance. It’s been updated a bit, but still maintains a certain old world style. It’s strong but no where near the power that was Opium. It smells pleasant but probably won’t become the iconic success that Opium saw. It’s just a nice flanker, and that’s about all that can said for it.