I will forever associate Jessica Simpson fragrances to that line of supposedly edible perfume that I have yet to taste for myself. People have reported they taste like varying degrees of fake vanilla flavor though. Anyway, this post isn’t about edible perfume. It’s just about Jessica Simpson’s newest fragrance, Vintage Bloom. 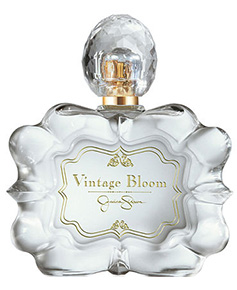 In Bottle: Smells fruity and floral. I know this is being pushed as a pure floral, but it smells like a standard fruity floral to me.

Applied: Yeah, big old fruit. I want to blame it on the combination of citrus and raspberry. There’s also more florals in this than peony. I want to say rose and jasmine with peony to make the trifecta of floral boredom. The end game is also largely typical with a clean sandalwood fade. The fragrance as a whole is dull but very wearable. It’s a nice neutral scent for a younger crowd that wants to smell nice and not controversial or complex in any way. It reminds me of–well, of a lot of other fragrances that smell exactly like this–all of which also fall into the celebuscent category. Chances are, if you own anything with another celebrity’s name on it that leans more towards “smells like flowers” than “smells like fruit” or “smells like candy” then you don’t need to buy a bottle of this. If you own any of Bath and Body Works’ latest floral releases then you don’t need a bottle of this. If you are missing a “smells like flowers” celebrity fragrance and feel like you need a little more Jessica Simpson in your life then you could do worse than Vintage Bloom.

Extra: I always feel like I have to write in a disclaimer for fans of these celebrities that no, Jessica Simpon/Paris Hilton/Britney Spears did not become perfumers overnight and mix their own fragrances in their bathtubs or whatever. Vintage Bloom was actually made by Parlux. The people (with an unfortunate Flash website) who brought you other fragrances such as Rhianna’s Reb’l Fleur, Paris Hilton’s Can Can, and Queen Latifah’s Queen.

Design: The bottle could look better. As it is, it’s one of those over-designed pieces that’s too ornate to be called simple, modern or elegant, and not ornate enough to qualify as extravagant. It kind of skirts that awkward middle where it doesn’t hit modern or “vintage”. It just looks kind of tacky and out of place and I can’t say I’m a big fan.

Remember when Jessica Simpson actually sang for a living instead of selling perfume with her name on it? Or embarrassing herself on a reality TV show? Is she even still singing? I’m about as up to date with music as I am with television and movies.